The peoples of old used to be finely aware of the ghosts of the departed that lingered in deserted spaces. Departed meaning just that, of course: not necessarily dead ‘uns. And that was a bit like us at Coldhome for a couple of days after the end of our Work Week, otherwise known as Raising the Roof – which, unbelievably, is already more than a week into the past.

Yes, it was quite strange how we moved disconsolately amongst the secured roof-timbers or picked up offcuts, or gathered lost tools from the floors, and could practically hear with our physical ears snatches of conversations, laughter, short technical dialogues, and of course expressions of the simple wishes of the volunteers – time for coffee? beer? any food? beer? A little more beer?….
Actually, the picture – they are all empties (though not quite all the empties), and exclusively the home-brew empties, ie matched by similar quantities of shop-bought brew – doesn’t to my mind speak of overindulgence when you consider they’re the intake of well over twenty adults over a total of six days’ good-going labour: I took it out of a sense of satisfaction that I could now re-claim my bottles for other brews, as I’m slowly learning the arts of making beer from scratch. 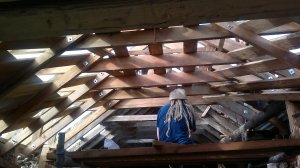 Mealtime shot with the tumbledown shed

I believe there are various pictures of the week on Facebook, so (apart from some pics in a pending “technical” page) I’m just including an arty number with Dru – and a mealtime snapshot with the Tumbledown shed, mainly because it (the shed) reminds me of a decrepit pet (dog? bear? dragon?) presiding benignly over proceedings, and probably not long for this world.

Anyway, we’re over the work, we’re over the excitement of such a large and joyous crowd of people, we’re even getting over the silence and the come-down and the exhaustion and the minor squabbles and the colds and related bugs, and we can look up and say, hey, we’ve got a roof! Or half a roof, rather. Or half a roof on the first of the three buildings that need a roof….. Well, that means we can do it all five times over again. Hooray. That should take another seven to ten years. I hope the crowd will still be young and fit enough. Maybe they’ll have an army of children of their own by then who can be cajoled into a fresh wave of activity.

What can I say? Some time ago CharlieR mooted the idea of a Coldhome Role of Honour, which we were all quite enthusiastic about, at least until someone anxiously mentioned the possibility of forgetting someone, so we all fell into a sombre consideration of Sleeping Beauty and the thirteenth Fairy. One day we’ll risk it. For the moment, and with our memories still fresh, we gratefully salute all who took part: Eileen and Sally and Kevin and Alex and Steve and Sally and Callum and Simon and Ella and Ellie and Bill and Eleanor and Dan and Mark and John and Rosie, not to mention the semi-residents, Abi and Will and Ben and Anna and of course Dru and Rebecca. This tally falls one short of the twenty-three workers that Rachel said had passed through: I fear we shall fall into a hundred-years’ sleep…..

Last night of the work week coincided with Rachel, Annie and me doing a slot at a ceilidh in Huntly which we’d agreed to earlier in the year and all felt we could have happily done without just on that particular evening. However – probably not unusually for such events – the original twenty minutes required was slashed to ten at the last minute, which was probably quite a relief, though it meant that the last-minute scramble to re-arrange our set meant we finished up well short even of the ten minutes, and as none of us were in very talkative mode we didn’t even fill up the time with introductions and bad jokes. We managed to rise above throat infections (and, as I say, exhaustion) for just long enough to thump out our three non-solo numbers and decided that we were rather glad of PA system, too, though I do believe we “popped” more than you’re supposed to, being but wet-eared amateurs in front of a mike.

The pressure, man, the pressure – isn’t over yet, as I (and Paul K, though separately) unwisely agreed to parade ourselves as Authors at two events during the Huntly Hairst celebrations. Why unwisely? Well, in my case when poor Fiona Wilson was trying to get me to write something down about what I’d be talking about so she could get it into the events catalogue (programme? notes? – doofer: doofers always do) I inadvertently jotted something down about having travelled in many foreign countries and, for want of a better thing to do, sent it to her. So now I’m in trouble. I never go anywhere foreign, or indeed anywhere at all, unless Annie drags me, and then only if there’s a bar and a hot bath nearby. Hell, Huntly seems like a metropolis. While I was waiting for our chips in the Dragon Garden (ha, maybe I do go to some exotic places) after the ceilidh the other night, I was accosted by a chap who seemed to be having some problems with his balance and said he liked my hairdo – well, he addressed me as Snow-white and started looking around for my seven dwarves, to his own great hilarity. That’s the sort of thing that happens in a metropolis, though, isn’t it. Anyway, Saturday coming will just have to see me telling a heap of lies and maybe I shall manage to preserve a shred of dignity. My ancient mentor Jock Paton used to say hawf the lees I tell arena true; and I think I might try and confuse them with something like that. Maddy says I shall also have to sign at least a hundred copies of Dragon Fire for sale.

Don’t know about Paul though: he’s at another venue, presumably talking about Gaia’s Children. They didn’t ask him if he would be requiring a crêche, which makes me really wish I’d spent more time writing adult stuff.

I’ve just realised: Paul – he was the twenty-third fairy…. Now I really am for it.

By the way: last blog I included a couple of pictures by CharlieR; I couldn’t download them, it seemed, without entering the unholy portals of Facebook, and by the time I’d decided the whole kerfuffle of registering etc wasn’t worth it and had gone off to retrieve a copy mechanically, it was too late: I was on, I was caught, a worm wriggling on a hook. So thank you everyone who sent Friend requests: my reluctance to get on and take you all to my bosom is not a personal reluctance but a reluctance about finally confronting the Beast 666, Ahriman-the-Great, He-who-rises-in-the-last-Days (alias Facebook), at my own writing-desk. I’ll get round to it, I know I must, it is my Destiny…..

A solution for the accommodation Challenge. The erecting and fabricating of the yurt was Abby and Will’s work. A bit of a Tardis experience, a canvas yurt space – definitely one of those more-than-the-sum-of-its-parts phenomena, a satisfying combination of shape and light and space which makes me prepared (almost) to revise my opinion of camping. 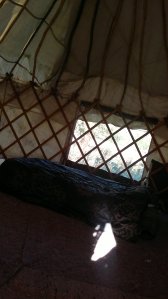