We were all up at the community hall in Glenlivet last weekend, where Annie and Rachel, and some of the kids, were taking part in “An Evening of Women’s Voices” in aid of somebody called “Sea Shepherd” (sounds a bit messianic, if you ask me). I’m afraid Sea Shepherd won’t be quite as much richer from the event as everyone would have liked, as snow was threatening, and if snow threatens in Glenlivet you take it seriously. Only three members of the general public turned up, and two of the acts pulled out, leaving the young people to take up the first half and Rachel and Annie to have to extend their rehearsed programme considerably for the second. The General Public left at the end of the first half, we hope because they had a previous dinner-date and not because “we weren’t expecting a concert from a bunch of kids”, or some such. The kids’ part was in fact very delightful, and far from unprofessional, not that professional was in their minds – they just got up and performed as easily and naturally as they do everything else. Poor Ellie was considered too young to take part, but she launched her own floor-show on – well, the floor, in front of the stage. Jessiman School-trained, after all, is Ellie.

The exit of the General Public didn’t matter too much, as it left a large gang of friends and their kids, but what is interesting is how it changed the whole dynamic of the performance. Both Rachel and Annie remarked on it. What was it: disappointment? Not exactly. Being less “on their mettle”? Probably. Being more prey to the assaults of embarrassment? Certainly. Annie, who is actually a natural performer, “under-did” her act more than she intended. Rachel allowed herself more obviously surprised/questioning/apologetic glances at Annie if things weren’t going quite as rehearsed.

Things were different a few weeks previously, when they took part in a performance at the Tin Hut (Gartly village hall), that time – there being no restrictions as to gender – backed by a couple of chaps, me on the flute to be exact and the wondrous Tim Branston on his slide guitar, and we brought off – I say it with due modesty – a scorching performance. That’s to say, we enjoyed it and if the audience didn’t they didn’t let on.

So much goes into the whole thing of Performance, and frankly I think most of it is bad. Take traditional dances, ceilidh-type frolics. You require musicians for these. They aren’t performers as such, they’re providing the music you need and they get paid for it (or should), and everyone does lots of clapping and shouting to keep the enthusiasm level up. That strikes me as a reasonable balance of “audience” and “performer”. This is also the reason I like our monthly sessions in the Tin Hut – and the various other folk-ish clubs in the area too, though the Tin Hut is special because of its acoustics. The balance is good. Everyone gets an equal chance to take part, regardless of their supposed credentials; everyone gets an equal – and fairly muted – amount of applause. Sometimes something that someone plays or sings particularly appeals for one reason or another, and then there are additional sounds of satisfaction, but this isn’t the rule. I call this healthy, and while there’s no denying that everyone loves “a good performance”, even (in small doses) “a great performer”, the general balance of audience and performer, contaminated as it is by the cult of Celebrity, has become pretty unhealthy, wherever you look.

I guess the rot set in back whenever, when music stopped being solely the background to some Count’s dinner party, and big symphony orchestras were brought in to fill the grandiose concert halls that everyone wanted in the big cities. There was something faintly democratic about this, but it also forced the musicians to become performers, and everyone else to sit on their bums and participate by shutting up; and then of course you had the super-musicians, creamed off from all over the Empire, to prance in and head up the orchestra, so the rot got even rottener with a new cult of celebrity. The golden years of Classical music, these. Later on, when orchestras got too expensive, along came the Gift of technology: amplifiy the sound, and then three guys could fill the whole space with the same – no, with bigger sound, with as much sound as you had the electrics for, really.

It seems to me that when true belief collapses, self-belief takes its place, and as self-belief is invariably phoney, a sort of icon-fuelled self-belief – really just an old- fashioned religious-superstitious belief – takes its place: Celebrity is such a case. The geezer up on the stage will do it all for us. We may be inadequate, but he will carry our inadequacies and transmute them into glittering treasures. He is our messiah – at least till we decide, in our religious-superstitious frenzy, to crucify him…. (Or her, one is obliged to add….)

Where was I? Ah yes, the Tin Hut. Fraser Wilson has managed this little treasure so well that fairly eminent singers/bands from both sides of the Pond now phone up to ask if they can do a gig; and of course we once-a-monthers who gather for the ordinary Tin Hut Sessions can bask in the reflected glory. I don’t know if this is good. I also don’t see that it’s inevitable that someone who has a “great talent” should be expected to “move on to higher things”, as we say, meaning join in the brain-drain to ever bigger cities. Amongst the musicians of Old, I think my favourite is still Franz Schubert, a man who sweated, bled and snored great tunes, who hated public performance, and whose profoundest works were written for his circle of friends to play, or listen to, in their own homes or the local Kneipe. That sounds ideal. I was interested to discover that Schubert’s teacher was Antonio Salieri, the court musician who features as Mozart’s adversary in Peter Schaffer’s Amadeus. I’m not quite sure what this might imply, but I know I’ve always had the greatest admiration for unsung heroes like Session Musicians, and I think Salieri might have been one of those, while dear Wolfgang A, I fear, may have belonged to that special breed of performing monkeys who constitute the Mainstream and for whom celebrity is all.

Wouldn’t we all go for it if we could though? Who can say for sure. I’ve been having an Abscess recently, so dentists are on my mind, and dentists waiting-rooms always take me back to a cartoon I saw years ago in Punch magazine (it’s generally Chat these days, or Vogue,  Bunkered,  Horse and Hounds, but back then it was always Punch): I can’t remember the picture, but the caption ran, Oh yes, my husband’s an author – but so far, luckily he’s been able to avoid all that tiresome business of publication… 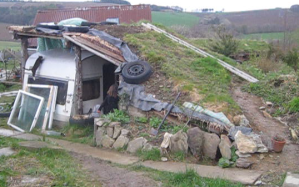 Here’s an “after” picture of my Author’s Den to complement the “before” one of last time, with the snow replaced by mud. I’m taking advantage of all this wetness-from-the-sky to carry up bucketfuls of earth and turves and plonk them on top of the roof whenever I have time, though the buckets are getting heavier as the ground gets muddier and staggering up the ladder gets increasingly hazardous. There’s a weed-grass that grows round about here, I’m not quite sure what it is but it seems to work pretty well on the turf roofs, forming great big mats of short fine growth that likes wet but doesn’t seem to mind drought too much. I hear May is scheduled to be as miserable a month as April, so that’ll extend the season for turfing activities, as well as for tree transplanting, which we still have a bit to do of (there’s the kind of syntax of which a writer may be proud). So the weather’s always perfect for something. I’ll have to move that stack of old windows from in front of the south-facing window and let in some light. Our littlest tabby cat (pictured in escape mode, Ellie being just round the corner) has been trying for months and now seems to have finally attracted the one intact male left in the District (may be a wild-cat, I suppose). This at least is my guess based on the smell in the caravan, which I again left open one night.

I’ve reached the box of old poems that lie somewhere within, two of which I’m using to start a “poems” page. After much thought about how to arrange my old poems on this page (even some new ones too, as I do occasionally write them still), I decided just to fish about in the various boxes, folders and notebooks and pick out at random. As a postgraduate student I used to inveigh against the habit in Literature departments of requiring a historical/biographical context to understand poems or other works, saying it was just another facet of the Cult of Celebrity and that the work should be supremely capable of standing on its own: so now it’s going to be fun reversing that stance and giving as much details as I feel like. What my eye fell on first was a little booklet put together many years ago (1984, I suppose) by a young German artist who was staying with us at the time. Scarlet picked through sheaves of my poems and came up with a handful which she wanted to illustrate with her intricate pen drawings. I’d better not try to reproduce any of these here, as we have long since lost touch so I can’t ask her permission. But her “Erinnerung an Schottland” is now my “memento of Scarlet Mosel”. The poems she chose – like the first, “Lady Isis” – were mainly love-poems, though love poems have never particularly been my stock-in-trade. The second, “Your house grows….“, is one I wrote for my stepmother’s birthday during one of her bouts of back-pain.

There should now, or soon, be a tab at the top of the page directing you to technical stuff, such as the construction of our turf roofs. This was a split-off from last time’s blog when Anna and I decided that getting too technical on your ass about Coldhome stuff wasn’t a great idea if you’re one of those who read this because of your interest in my words of wisdom about writing issues. In fact, we were discussing splitting the blog into two separate but interlinked blogs. It was Abby who put a spoke in there with the enlightening idea that the way it was (is, has been up to now) was “living literature”. We fell for that one, and I think Anna may even have stuck that up as a quote somewhere.